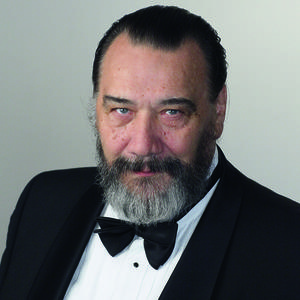 Born in Moscow. In 1974 graduated from the State Music and Pedagogy Institute named after Gnesin, now The Russian Gnesin Academy of Music (class of Evgeny Ivanov).

In 1974-91 performed at the Stanislavsky and Nemirovich-Danchenko Moscow Music Theatre. In 1989 his Boris Godunov was considered to be the best opera part of the year.

Since 1991 has been teaching at the Russian Academy of Theatre Art, since 1994 has been a professor, head of the solo singing faculty.

Since 1991 has been a soloist with the opera troupe of the Bolshoi Theatre.

Awards
Title of People’s Artists of Russia
1997
Order of Merit for the Fatherland, III degree
2008
Order of Friendship
2019
2nd award of the International Competition of Musicians-Performers (Geneve)
1973
2nd award of the All-Union Competition of Vocalists named after M. Glinka
1977
Order of Merit for the Fatherland, IV degree
2001
Medal For Strengthening the Combat Commonwealth
2013

UN Order “Unity” (“For deeds for the benefit of the peoples”)

“Legend“ Prize of the “Seeing the Music“ Musical Theatres Festival

Prince Yuri (The Legend of the Invisible City of Kitezh and of the Maiden Fevronia by N. Rimsky-Korsakov)

King of Clubs (The Love for Three Oranges by S. Prokofiev)

Mamyrov (The Enchantress by P. Tchaikovsky)

Miller (Rusalka by A. Dargomyzhsky)

There are over sixty parts in his repertoire

Performed on stages of the largest theatres around the globe, such as the Royal Opera in Covent Garden, the Metropolitan Opera, the Paris National Opera, the Teatro Real in Madrid, the Bavarian State Opera in Munich, Le Grand Theatre de Geneve, the Gran Teatre del Liceu in Barcelona, Chicago’s Lyric Theatre and the Grand Opera in Houston (USA), the Opéra National du Rhin (Strasburg), L’Opera National de Lyon, the opera theatres in Marseille, Nantes and Montpellier (France), the Theatre de la Monnaie in Brussels, the Theatre Basel, the National Theatre in Prague, the Auckland and Wellington Theatres (New Zealand) as well as at the Palau de les Arts Reina Sofia (Valencia), the Cologne Philharmonic, the Royal Festival Hall in London and more.

Participated in the festival the Maggio Musicale Fiorentino, the Wexford Festival, Münchner Opernfestspiele, the Lincoln Center Festival in New York, the Hong Kong Arts Festival and others.

In 2006 started the Foundation for the Revival of Culture and Traditions of Small Towns of Russia. Performs spiritual music. Gives solo concerts at the Moscow International House of Music, the Tchaikovsky Concert Hall, the Beethoven Hall of the Bolshoi Theatre, in various cities in Russia, as well as the Kremlin and the embassies of Russia in Rome, Paris, Berlin and London.

1983 — Sorochintsy Fair by M. Mussorgsky, the part of Cherevik, conducted by V. Esipov

1990 — Aleko by S. Rachmaninov, the part of the Old Gypsy, conducted by D. Kitayenko, gramophone recording

1992 — Francesca da Rimini by S. Rachmaninov, the part of Lanciotto Malatesta, conducted by A. Chistyakov

1994 — Aleko by S. Rachmaninov, the part of Aleko, conducted by A. Chistyakov, Le Chant Du Monde

1997 — The May Night by N. Rimsky-Korsakov, the part of Major, conducted by A. Lazarev, Capriccio

Kashchey the Immortal by N. Rimsky-Korsakov, the part of Burya-bogatyr,
conducted by A. Chistyakov

The Taming of the Shrew by V. Shebalin, the part of Hortensio